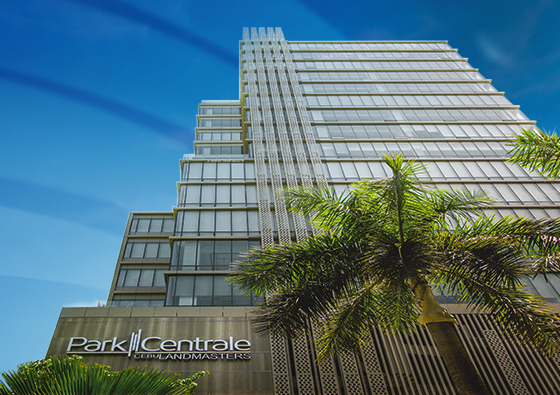 We provide our investing public with necessary information on the company’s financial progress and stock performance.

Cebu Landmasters, Inc. (“CLI” or the “Company”) is the leading real estate developer in Visayas and Mindanao currently located in 15 key cities.

Despite the crisis brought about by the COVID-19 pandemic, CLI continues to establish strength and leadership in the VisMin region. It plans to launch a total of 14 projects in 2020 worth P19.4 billion focused on the economic and mid-market market segment. The company intends to roll out 7,000 more economic housing units by year-end to replenish its diminishing housing inventory.

During the 1st half of 2020, the Company announced a 41% growth in sales to Php 7.43 billion year-on-year driven by increased demand from end-users of affordable homes seeking safer and more secure dwellings as protection from the COVID-19 pandemic. It has successfully launched a total of four projects in areas of Cebu, Bohol and Iloilo:

Until the end of 2019, 40% of CLI buyers were mostly OFWs, In the second quarter of 2020 when VisMin was under lockdown, CLI’s share of OFW buyers dropped to 20% while local buyers’ share now increased to 61% from previously 40%

In July 22, the company’s Ming-Mori Minglanilla Reclamation Project covering 100 hectares was issued an Environmental Compliance Certificate (ECC) by the Department of Environment and Natural Resources following a comprehensive two-year review. The joint venture among the local government of Minglanilla and private consortium partners Ming-Mori Development Corp. (MMDC), envisions a world-class estate that will generate over 75,000 jobs in the municipality. The techno business hub will be a township project to house light industrial facilities with residential, commercial areas and an integrated port facility.

Additionally, after regular review and monitoring of CLI’s financial performance and position, Philratings has maintained its initial rating of PRS Aa with Stable outlook to Cebu Landmasters. Obligations rated PRS Aa are of high quality and are subject to very low credit risk and capacity to meet financial commitments is very strong. The rating and outlook reflect the following key considerations: (1) Sound management and strategy, with a sustained competitive advantage in the Visayas and Mindanao markets as evidenced by its growth over the last few years; (2) Sustained growth in the past years although the pandemic is seen to temper growth momentum in the medium term; (3) Good coverage of interest and current debt, complemented by an adequate capital structure, which are seen to provide a satisfactory buffer for debt servicing during the pandemic; and (4) Threats from a highly competitive market, with peers having access to significant capital and a substantial landbank, counterbalanced by the Company’s ability to form strategic joint venture partnerships.

REVIEW ON THE COMPANY’S RESULTS OF OPERATION

CLI reported consolidated revenues of Php3.51 billion in the 1st half of 2020, matching the figures accounted during the same period of last year. The strong topline is attributed to the continuous construction in majority of CLI sites during the 2nd quarter.

Furthermore, substantial increase of 137% was posted from its recurring revenue from Php 38.2 million to Php 91.3 million. Revenue contribution from recurring business has increased to 3% from 1% in the 1st half of 2020. This is mainly caused by an increase in GLA and revenue from hotel business.

Revenue from sale of real estate was reported at Php3.42 billion from Php3.46 billion y-o-y. The slight decrease in real estate sales was due to construction slowdown during the 1st half brought about by the quarantine restrictions in some of the company sites. During the 2nd quarter, CLI continued to record completion progress from most of its projects while abiding to regulations and safety measures imposed by the local government.

Revenue from sale of real estate for the first half of 2020 is driven by the Garden Series (Mid- market), representing 42% of total revenue, followed by Premier Series (High-end market) (31%) and Casa Mira (Economic market) (23%).

Garden Series, increased by 17% to Php1.45 billion from Php1.24 billion. The growth was driven by Mivela Garden Residences, the fastest selling mid-market condominium project located in Banilad Cebu City which was launched in 2019.

Premier Series, posted a minor decrease of 5% to Php1.09 billion from Php1.15 billion due to lower POC increment. This was affected by the implemented community quarantine in Cebu City for Astra Center and Baseline Prestige and Davao City for the Paragon Center.

Casa Mira, a decrease by 19% to Php812.5 million from Php 1.0 billion. Most of the company’s on-going casa mira projects are recently launched or nearing completion with less incremental percentage of completion.

In terms of location, CLI’s presence in Cebu remains to be strong, representing 58% of the total revenues, followed by Cagayan de Oro (CDO) (15%) and Bacolod (10%). In the same period of 2019, Cebu generated 61% of the total revenues, followed by Bacolod (16%) and Dumaguete (9%). The Company expects to grow real estate revenue contribution from projects launched in the first half of 2020—Casa Mira Iloilo and Velmiro Greens Bohol, Casa Mira Towers Mandaue Tower 2 and Casa Mira South expansion.

In September 2019, CLI started operations of Citadines Cebu City. Its first hotel project has generated Php38.22 million of hotel operations revenues in the first half of 2020. The hotel was able to maintain 60% to 70% occupancy rate during the lockdown period wherein booking largely came from business process outsourcing companies that housed their employees during the community quarantine period.

CLI’s rental revenue amounted to Php32.31 million, an improvement of 16% from Php27.74 million. The company’s total GLA increased by 23% from 11,815 (sq.m.) to 14,534 (sq.m) due to the turnover of Casa Mira Towers Labangon retail area and Baseline Retail and HQ, the office component of Baseline Center in Cebu. Rental occupancy rate as of June 30, 2020 is at 83%. The growth in GLA outweighed the rent discounts provided during the lockdown period.

Cost of sales and services for the 6-month period ending June 30, 2020 is at Php1.80 billion, 1% y-o-y increase from Php1.78 billion. The increase is in line with the growth of the Company’s revenue.

Total operating expenses amounted to Php598.44 million, a 39% y-o-y increase from Php429.74 million. Commissions and Incentives grew to Php188.16 million, from Php57.87 million, brought about by the implementation of PFRS 15 and increase in reservations sales during the quarter. Salaries and employee benefits increased by 35% to Php164.29 million from Php121.48 million. The company has increased manpower compliment from 385 to 493 to support growth expansions across VisMin. There was no reported retrenchment of employees despite the health crisis. Other operating expenses also increased as CLI implemented and heightened safety hygiene and sanitation policies during the quarantine.

Borrowing cost and financing charges accrued increased by 27% y-o-y to Php257.69 million from Php 202.87 million which represents the costs on loans and corporate notes obtained to fund the Company’s construction projects. The company’s average borrowing cost is 5.3%.

REVIEW ON THE COMPANY’S FINANCIAL CONDITION

CLI’s balance sheet continues to be solidly positioned to support construction and its operations. As at June 30, 2020, CLI reported 16% growth to Php44.42 billion in total assets from Php38.28 billion as at December 31, 2019. This is driven by the increased volume in contract assets and investment properties.

60% increase in Cash and Cash equivalents

10% decrease in Trade and other receivables (including non-current portion)

Decreased to Php5.30 billion from Php5.88 billion as projects come near to completion and lesser project launches during the first half of 2020.

25% decrease in Deposits on land for future development (including non-current portion) Decreased to Php961.03 million from Php1.29 billion as fully paid land purchases amounting to Php1.27 billion were to reclassified to raw land inventory. Additional deposits on land for the year amount to P939.33 million.

64% increase in Due from related parties

Transactions paid by CLI (Parent) on behalf of its related parties increased to Php16.11 million from Php9.95 million.

32% increase in Prepayments and other current assets

Increased to Php2.98 billion from Php2.27 billion coming from advances to suppliers and subcontractors and related input Value Added Tax on the construction materials purchased.

10% increase in Property and equipment

Increase to Php392.08 million from Php355.12 million due to construction in progress of CLI’s sale and administrative office.

Increase to Php981.61 million in Right of use asset and Lease liability to Php787.86 million with recognition of the high-value leasehold rights acquired on the 43-year land lease for Cebu Business Park Office and Hotel Tower and 40-year land lease for Patria de Cebu.

5% increase in Other Non-current assets

Increased to Php20.20 billion from Php16.85 billion mainly from the Php5.30 billion Corporate Notes availment during the year.

27% increase in Trade and other payables (including non-current portion)

Increased to Php7.35 billion from Php5.78 billion representing outstanding obligations to owners of parcels of land acquired, subcontractors and suppliers of construction materials.

Increased to Php1.25 billion from Php1.12 billion due to additional recognized tax liability on taxable temporary differences in net income.

On March 27, 2020, the Board of Directors (BOD) of the Parent Company approved an additional Php500.0 million stock buy-back program to support CLI’s stock price and take advantage of the current low valuation for the next two years. Treasury shares purchased during the period amount to Php151.78 million.

The Cebu Landmasters Inc. (CLI or the “Company”) uses a range of financial and operational key performance indicators (“KPIs”) to help measure and manage its performance. These KPIs reflect the Company’s continuous focus on efficiency, cost control and profitability across all its operations. Management considers the following as KPIs: 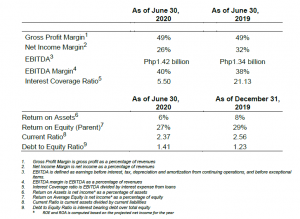 CLI reported Group Gross Profit Margin of 49% and Net Income Margin of 26%. The company’s gross profit margin remains to be stable and within target. The decline in the net income margin was caused by an increase in the OPEX ratio. The said increase was mainly due to the higher recognition of commissions and incentives in accordance to the PFRS 15. The standard dictates to recognize commissions and incentives in line with the construction percentage accomplishment to match the revenue and its corresponding expenses.

For the first half, all other ratios remain healthy with Return on Equity (Parent) at 27% with Return on Assets at 6%. Debt to Equity ratio is now at 1.41x as at June 30, 2020 compared to of 1.23x as at December 31, 2019 due to increased borrowings to finance project construction and launches. The Company’s current ratio projects ample liquidity at 2.37x.

Management together with key officers continue to effectively handle their respective operations and financial requirements despite the pandemic. As a result, CLI’s financial position remains liquid and strong.

This site uses cookies to provide our guests with a smooth experience. By continuing to browse cebulandmasters.com, you are agreeing to our cookie policy. Learn more here