We share with you regular news and updates on our company performance and the progress of our developments.

Back to news & updates

CEBU, Philippines – Jose Soberano III, chairman and chief executive officer of Cebu Landmasters Inc. (CLI) has been named by the Cebu Chamber of Commerce and Industry (CCCI) as this year’s Entrepreneur of the Year. 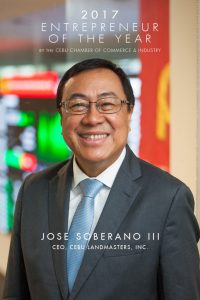 Soberano, who left Ayala Land in 2000 to build on what now becomes the leading local housing developer in Metro Cebu, received the award during the Grand Chamber Awards and Fellowship Night last Friday night in Marco Polo Plaza to cap the Cebu Business Month 2017 celebration.

In an interview at the event, Soberano said: “I feel very honored to be recognized.”

He added he attributes his company’s success to his people. “I share this to the people behind the organization who made it possible to grow the company in 13 years.”

He shared that as a boss, he looks at his employees as part of his family. He also espouses the value of integrity and being hands-on as an entrepreneur.

“Entrepreneurship is really spotting opportunities. And you have to put that into action. You can’t just leave it there,” he said.

“Recognize what are your strengths. And just like in any pursuit in life, there are ups and downs. But I feel it’s when things are rough that you become better. That’s really the real test on how you are able to grow,” he further advised aspiring entrepreneurs.

CCCI President Melanie Ng nominated Soberano for having distinguished himself as the only entrepreneur who steered his 14-year old homegrown real estate business to become a publicly listed company early this month.

The Entrepreneur of the Year award is the most prestigious among the five awards bestowed by the chamber. The other awards are Corporate Social Responsibility Institution, Small Business Entrepreneur, Countryside Entrepreneur, and Young Entrepreneur. The awardees were chosen by the CCCI board of trustees and past presidents.

Soberano, earlier this year, announced his firm’s P12-billion expansion in the Visayas and Mindanao to address the need for housing, offices, and commercial spaces. At present, CLI has simultaneous development projects in Cebu, Bacolod, Dumaguete, Cagayan de Oro, and Davao for this year.

Exuding confidence on the economic prospects of Visayas and Mindanao, Soberano urged local entrepreneurs to become champions in their turf, and at the same time, leverage opportunities beyond Cebu and the region.

This site uses cookies to provide our guests with a smooth experience. By continuing to browse cebulandmasters.com, you are agreeing to our cookie policy. Learn more here